COLUMBIA, S.C. — Only two anglers have a chance this week for back-to-back Bassmaster Elite Series wins, albeit wins of a different color.

Steve Kennedy, just off his May 8 victory at West Point Lake, could claim back-to-back Elite wins by taking the title in the May 12-15 Evan Williams Bourbon Carolina Clash on Lake Murray.

Fred Roumbanis of Bixby, Okla., victor in 2008 when the Elite Series last competed on Murray, is the only pro who could claim consecutive Carolina Clash titles.

Just to make things interesting: Kennedy was runner-up to Roumbanis in that May 2008 tournament. If they do well again on Lake Murray, it won’t be because they were able to repeat how they attacked it in 2008, Roumbanis and Kennedy said.

“The fish don’t seem to be in the same patterns,” said Kennedy, who traveled home to Auburn, Ala., between tournaments so got in just one day of practice. “To me, they’re sitting deeper. They’re not where I expected them to be.”

Roumbanis has been on a strong roll since January and was thrilled that it continued here.

“I’m stoked,” he said. “It’s just been awesome. The year’s gone as good as I could have imagined – or better.”

He fished offshore points and swam a jig. It was a unique pattern and he had his areas all to himself.

Pre-dawn at the second day of the Bassmaster Elite Series event on Toledo Bend was one of rushed apprehension under an intense and ever changing sky. Yet it should be no surprise that three of the pros setting inside the Top 15 of the standings share a relaxed attitude centered on smiles.

Rain fell on those who were first in the launch line like Fred “Boom Boom” Roumbanis. But, no matter how unloving the weather may be, Fred is never alone at morning take-off. Wife Julie and young son Jackson are fixtures at every Bassmaster Elite Series launch. Today is no exception. Amid the gloom and rainy outside, is a party on the inside. Jackson sits grinning in a car seat barefooted and eating Apple Jacks – dry – no milk necessary. However, music is a must for Team “Boom Boom.”

So between gulps of an energy drink, Freddy, a Californian to the core who now lives in Bixby, Okla., switches from thoughts about catching another monster 21-pound limit to playing the role of club disc-jockey. “It’s Tricky by Run-DMC is Jackson’s all-time favorite song, so we always play that in the mornings for him,” says Freddy, before switching over to Johnny Cash’s 1963 gem, you guessed it, Jackson.

2nd: Roumbanis on the Move

After lackluster seasons in 2009-10, Roumbanis is on a strong roll. He’s cashed a check in every event he’s fished in 2011 (including one for a 7th-place finish in an FLW Tour Open) and is now primed to post his best showing of the year.

Bassmaster Elite Series pro Fred Roumbanis started and ended the 2010 season on sour notes, but 2011 has been a much different story thus far. The California native who now resides in Oklahoma finished in the 20s in both Elite events in Florida and also notched a 7th at the Okeechobee FLW Tour Open in January.

That’s quite a contrast to last year, when he opened with 85th- and 70th-place finishes in California and closed with an 82nd at Clarks Hill, a 77th at Kentucky Lake and an 87th at Fort Gibson.

“Last year was brutal and I could only go up from there,” the two-time Elite Series winner and two-time Classic qualifier said. “I think I might’ve finally learned to slow down – in all of those tournaments I keyed in on one or two areas and I just put the trolling motor down and fished. 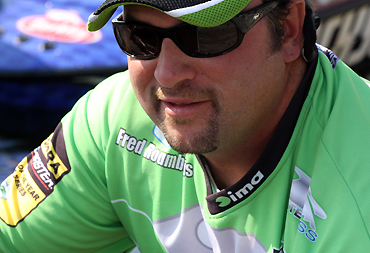 “In all three of them I was really consistent over the first 2 days. I just wasn’t able to make any big moves on day 3.”

He fished differently in each event – he sight-fished at Okeechobee, flipped at the Harris Chain and threw a frog at the St. Johns River.

“It’s good for my confidence because now this year doesn’t have to be such an uphill battle, and I’m really looking forward to the rest of the season.”

As happy as he is with his performance thus far, Roumbanis is absolutely baffled that 62 pounds isn’t good enough to be in the lead. What’s more, he’s got nearly a 6-pound hill to climb.

“I can’t believe I got 60-something and I’m not on top,” Roumbanis said. “I just can’t believe how good it is right now. I had one of the most unbelievable days of bass fishing you’ll ever have in your life. I am so excited to go fishing again tomorrow; the bite is just unbelievable.”

Fred Smashes Them Large On The Big O

Bixby, Okla., pro Fred Roumbanis owns the fourth-place spot after day one with 27 pounds, 9 ounces. Roumbanis found a big one on bed Tuesday in practice and ran to it immediately today.

“I got her in right away and from there I just relaxed and fished,” he said. “I caught pretty much everything in the morning. I had two 5s on one bed and within two pitches they were both in the boat. In fact, I caught every one I saw in practice and that never happens.”

Known for his swimbait prowess, Roumbanis is primarily flipping an El Grande tube.

Kissimmee, Florida — Second-year Bassmaster Elite Series pro Fred Roumbanis of Auburn, California, bounced back from his rookie season in 2006 to earn the Toyota Moving Forward Award, recognizing the angler who posts the greatest improvement from season to season based on the Toyota Tundra Bassmaster Angler of the Year standings. He received $10,000.

Roumbanis had a solid 2007 season, placing in the Elite 12 in three of 11 Bassmaster Elite Series tournaments to outpace his nearest competitor, Floridian Chris Lane.

“At the end of last year, my goal was to achieve this award,” said Roumbanis. “This season I learned to trust my instincts and go with what I know. I focused on catching a limit every day and one good kicker fish.”